"THE SANDS OF EGYPT"   A Text Adventure

(Windows TAB version created by catventure in May 2018)

It is an offline, downloadable parser-based interactive fiction game

This adventure game is text only and of the traditional sort. It is similar to the old Infocom/Magnetic Scrolls/Level 9 type which were popular in the mid 1980`s.

It is also similar to popular 80's 8-bit text adventures created with the QUILL, PAW or GAC adventure utilities.

There are no pictures or sounds, or animations in this  game. ( However there is a background music track.  Music credit: Eric Matyas; soundimage.org )

This not a massively big game, more of a mini-adventure really.
It is, however, complete, fully solvable and save/load enabled. It understands the standard adventure commands. The puzzles are not too difficult. Beginners or experienced adventurers *should* have little trouble in completing the game - eventually... :)

In this game you simply have to find the burial chamber in the nearby pyramid, get the treasure, and make it out of the pyramid alive within 24 game hours.

Program runs on Windows XP and above. After unzipping  read the "ReadMe" help text file for further information. Run the "Sands_Of_Egypt".exe application to load and start the game.

[Special Note: It's possible that some virus checkers may produce a "false-positive" warning. You may need to tell your antivirus program to create an 'exception' for the game app in order to allow the program to run]

Hi. I've downloaded the (presumably) final version of the game via the itch launcher but I have a major problem. Every time I switch tasks away from the window and come back to Sands of Egypt the start screen shows again resetting back to the beginning of the game. That screen is also triggered in other ways too but it's harder to pin-point what those are. Do you have a workaround solution to this problem or is it not something that happens to you? Thanks

Hi MagikGimp. Appreciate your feedback. This is a very strange behaviour and I  have tried but cannot seem to duplicate it on mine; nobody else has reported this one. Could you be kind enough to provide any more details + Windows version you are using etc?  Thanks for bringing it to my attention and I will try to help solve it if I can. 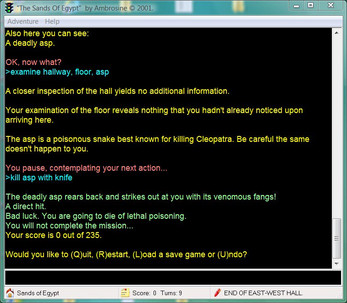 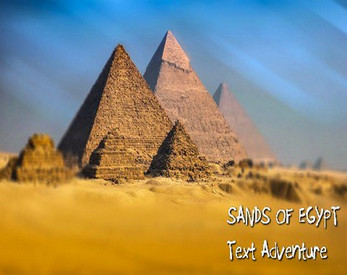