An offline, parser-based interactive text adventure for Windows XP and above.

YES!  a text adventure of the popular SIMS strategy game from an author who worked in the Sims Resource Dept at the time it was made (early 2000's).

For this reason it might be of historical interest to fans of the long running Sims game series and for those who may have forgotten it even existed...
Steve devised it originally as a competition for the members of the Sims Resource Community and I believe there were prizes given for those who could prove they had solved it!

The Sims: The Text Adventure! is a Text/Graphics Adventure with occasional sound effects where you simply move around the locations giving instructions using very basic commands and controls. As you make your way through the adventure, solving puzzles and completing basic tasks, your score will increase. There are a maximum of 100 points available in the game.

As you walk around the adventure and carry out tasks, your strength will deteriorate. Eating food will replenish your strength, so be on the lookout for sources of food. When eating something you will need to tell the game what you intend to devour. 'eat apple' would work fine. 'eat shoe' might not have such favourable results.

You can view your score at any time by simply typing 'score'. View your strength by typing 'strength'. Each strength unit will allow you to make 16 turns in the game. A turn is not just moving from one location to another though. Carrying out actions is just as exhausting, and has an equal effect on you.

A word of warning! There are ways in which you can be forced to retire from the game early, as well as starving to death! Be careful where you are adventuring, as some locations and actions may have a nasty surprise waiting for you just around the corner!

Moving around the game area is simple. Depending on the location you are in, you might be able to go North, East, South, West, Up or Down. Compass directions can be shortened to just n, e, s & w. So, from the start, to move East, just enter 'e' as the command.

See what items you are carrying at any time by typing 'inventory' or just 'i'.

If at any time you want to re-read the room description, just type 'look' or 'r'.

You will need to look at and/or examine many items you come across in the game to find clues to help you solve the adventure.

Examine anything within the adventure by typing 'examine' or 'exam' or 'x'.

Use the 'look' command in the same way. Here are 2 examples:

You might want to communicate with other characters in the game. For this try the 'talk to' command, i.e., 'talk to policeman'.

The 'use' command comes into play when making use of an object you might find. You might even need to identify what you want to use, and for what purpose. Commands might be, 'use key' or 'unlock door with key'.

During the adventure you will need to work out puzzles and execute certain actions with the correct characters and objects. You will need to use verbs as your commands, such as get/take, drop/put, wear, wait, give etc.

You may save the present game position or state of play by typing 'save'. A file requester appears and prompts for a filename (.tsav)

Previously saved game positions can be loaded by typing 'load' from within the game.
A file requester appears and asks for a .tsav file to load.

'quicksave' or 'qsave' or 'qs' will save a quick snapshot of your game position without using a file requester.

'quickload' or 'qload' or 'ql' will re-load your game position that was saved with the last 'quicksave' command.

Typing 'restart' will end the current game and restart the adventure from the beginning, if confirmed.

Typing 'quit' will end the game after confirmation.

Typing 'undo' will undo your last move and take you back one turn.

If the game ends due to death, strength depletion etc... a prompt to either quit, restart, load a saved position or undo the last move will appear.
There are also a few 'Easter Eggs' hidden in the game for you to discover. I won't give any clues to them yet though, so keep your eyes peeled when looking at the location pictures! And don't forget to examine anything suspicious!

Here's a tip to get you going: If you spend too long before giving a command, you wait. This constitutes a turn, so don't leave the game unattended for too long. You might return to find a dead Bob!

*Special Note: It's possible that some virus checkers may produce a "false-positive" warning. You may need to tell your antivirus program to create an 'exception' for the game app in order to allow the program to run*

Sorry to bother you about this again. I am wondering if you could please answer one last question for me. There is not a walkthrough available anywhere online. I'll happily write one if that's helpful to you and I can get to the end of this game.

I now have the key and the spade (from the farmer), and I'm trying to get into the big mansion. All of the doors are locked and the key doesn't work on any of them. It also doesn't work on any of the other locked doors (in the leisure center, either locked house in the neighborhood). I've also tried digging on every screen and I cannot find any item.

What am I meant to do to get into the mansion? Am I missing a step, if so what?

Thank you in advance for your time.

I'm out but will reply tonight with the hint/solution hopefully.

Well Done! You found a bug (coding error on my part) preventing unlock door with key outside the mansion.

I've had to correct it and upload an update to my site that fixes that.

Please  download and use the newer version which is now available

when you are in this location:

The path isn't easy to spot from the Topiary Garden, hidden by the overgrown hedge overlapping the wall. It's deathly quiet here under the trees.

Thanks for your interest in the game.

I don't have a walkthru but if you have trouble completing it I could send you the database entries if that helps, otherwise I'm happy to continue supplying help with the individual puzzles you may get stuck on.

Thank you so much for this! Wow, this is very generous of you and greatly appreciated.

I will let you know if I run into any further issues.

Do you have a tip jar or a Kofi I can contribute to? I want to thank you properly for your dedication to your craft.

Just finished the game! I look forward to checking out your other work.

As a Sims fan, thank you from the community for preserving this neat little piece of Sims history!

Good to hear you were able to complete it!

The Arkham Abomination was my latest adventure. A Lovecraft fanfic horror which I entered into the Parsercomp-2021 jam. It is a text only one.

Tips, kofi... Well there is a PayPal donation button on my TAB site at tab.thinbasic. com

I hope this message finds you well!

I am writing to ask if you could please help me with an issue I am having with this game. (I know you are not the original creator, but I am at a loss at who else to ask).

The game seems to require that players know Will Wright's nickname from some chat room from back in the day. Is this outside information that is no longer available online, or can players find this info somewhere in game?

Also, could I please get a hint to the door password that leads to the courtyard? I have explored every room available to me (including upstairs) and examined every item in the game so far. I am at a loss as to what it could be.

Thank you in advance for your time.

Hi Quin and sorry for delay. Haven't looked at this in ages. I did not create the game just re-coded it in a later TAB version.

The code for the door is: reticulating splines

I cannot see from the data any clue to that!

In the game, when you access the computer and choose the the sims site "forum" you will automatically post a request to ask if anyone knows Will Wrights nickname. After that, check back to the forum later a couple of times and eventually a user called "tug" posts a reply with his current nickname that he's been using in the TSR chatroom.

Thank you so much! I don't think I ever would have guessed that, and I've been an avid Sims player for years!

Have a lovely day. 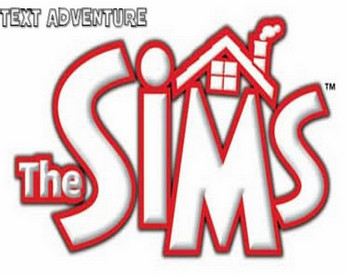